The child is both a hope and promise for mankind. 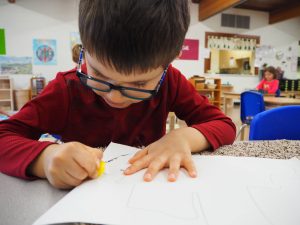 Self-directed discovery is the foundation of the Montessori method. Maria Montessori recognized that children have a natural curiosity and that their learning should be self-paced, self-directed. Children are encouraged to choose from specially designed learning materials to freely explore through practical play. Within the multi-age classroom, the Montessori method focuses on meeting the cognitive, emotional, spiritual, social, and physical development of children. Natural opportunities are provided which foster independence, citizenship, accountability, community, as well as develop capacity for concentration. Teachers’ primary responsibility is providing a nurturing, prepared environment that sparks further curiosity and a love of learning. It is through this prepared environment, with specially-trained teachers acting as guides, children freely drive their own learning, at their own pace.

There is a plethora of research that supports the need for hands-on, concrete experiences for children during their early years. Early childhood educators are responsible for linking these hands-on, concrete experiences to concepts, particularly to those within the context of the child. “If relevant experiences are linked regularly to language and vocabulary, the memory of the experience will trigger understanding when the concept is brought up again as they move onto elementary school,” (Murphy, 2016). The Montessori method provides a well-prepared environment, stocked full with hands-on learning tools for exploration, led by guides who are skilled in keen observation. Through practical play or ‘work,’ children establish their understanding of the world and how it works as well as develop a lifelong love of learning.

Maria Montessori and her legacy

Maria Montessori, the namesake of the Montessori method, was born in Italy in 1870. She was the only child to Alessandor Montessori, an accountant, & Renilde Stoppani, a well-read, educated woman with strong family values in education. It’s been said that Maria Montessori was way ahead of her time. During a period when women were often encouraged to pursue teaching, Maria was determined to break through the barriers of subscribed gender conventions. After the family had moved to Rome, Maria enrolled in an all-boys technical school with the intent to pursue engineering. Upon graduation, she applied for and was denied admission into medical school. However, she persisted and persevered. In 1896, she graduated from the University of Rome’s medical program, becoming one of the first female doctors in Italy.

During the early years of her career, Montessori worked primarily with children in psychiatric units or what were then known as ‘asylums.’ It was through this work as well as the works of  Jean Marc Gaspard Itard and Édouard Séguin that influenced her to pursue a journey of rewriting the pedagogy for children with disabilities. She observed that many of the children with whom she worked suffered from what she referred to as “pedagogical deficiencies” rather than “mental deficiencies.” It was at this time she began to shift her career from physician to educator. In 1906, she was invited to oversee the first Children’s House, a full-day childcare center for children ages 3-7 in a low-income area in Rome. With her extensive experience, keen observations, and careful preparation of the environment, the children flourished.

Within years, Children’s Houses were duplicated across Western Europe and soon thereafter, around the world. The first Montessori school in the United States opened in New York in 1911. During a trip to India in 1939, Montessori was held in exile for seven years with her only child, Mario, and together used this time to further develop Montessori educational methods. It believed her time in India fostered the inclusion of peace education in the Montessori method as well as a strong respect for and interdependence of all living things, which would be later known as “Cosmic Education,” Montessori curriculum geared primarily toward children between ages 6-12.

Maria Montessori published many works throughout her life, most widely known including The Absorbent Mind and The Montessori Method. She traveled extensively and lectured frequently throughout Europe and developed a training center for Montessori teacher preparation. She continued to be an advocate for women’s rights and was nominated for the Noble Peace Prize on multiple occasions. At the age of 81, Montessori died of a cerebral hemorrhage on May 6, 1952 in the Netherlands.

With over 15,000 Montessori schools across the globe, Maria Montessori’s legacy continues to live on today.